You are here: Home / BAIPA News / “So When Is it Enough?” asks Julie Freestone, about Touring and Promoting Your Book 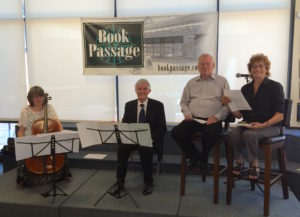 When we published our book Stumbling Stone in June 2015, Rudi and I agreed that we’d give it a year, during which we hoped we’d have an adventure and sell some modest number of books.  When June 2016 rolled around, we began telling people we were wrapping things up. We’d sold several hundred books, appeared at more than a dozen book events, gotten positive feedback from many quarters and much satisfaction writing the blog on our website (stumbling-stone.com).

We’d also met many other authors and heard other people’s fascinating stories.

A few friends—other authors—seemed surprised and wondered why we wanted to quit.  Our explanation was that we had already experienced much more than we expected and we were getting a little burned out.

And then the book seemed to take over control.  A number of people asked if we could do more events. Two German musicians decided they had an obligation to work with us to showcase our book and the music of a Jewish composer who fled the Nazis. They pitched the idea to Book Passage and to our surprise, we were able to do another event there. They also hinted there might be an opportunity to work with them on an international conference.

So at this point, we certainly aren’t saying no to anything that crops up, but we aren’t blogging as much or searching for book event opportunities. We’d be curious to hear from other BAIPA members about your timeframe and what’s a reasonable expectation for continuing to market your books.

Email us at [email protected]

With COVID-19 teaching us all how to function remotely, BAIPA will meet via ZOOM ONLY until it is safe to resume in-person meetings. (Even when we decide to resume in-person events, we will continue the Zoom option.) We are implementing all the recommended precautionary measures to keep our meetings private and safe for all participants. All members and visitors who register in advance will receive a link to attend via Zoom video conferencing. On the Friday evening before the meeting, we will send the link and password out to members and to non-members … END_OF_DOCUMENT_TOKEN_TO_BE_REPLACED