The 2016 BAIPA Book Award winners were announced at the December meeting. Below is the list of winners, the categories they won in, and a little bit about the authors and the books.

Dennis Koller was born and raised in San Francisco and attended St. Mary’s College, where he earned a degree in philosophy and later an MBA, spending the first 20 years of his career life in marketing.

However, he had a story to tell about Vietnam POWs and started it in 2008. But by the end of 2012, he had completed only 55 pages. At that rate, Dennis calculated he wouldn’t complete it until all the Vietnam Vets were dead. So in October 2012, he started writing full-time. His writing business is part of his company, Pen Communication. By the time he wrote “The End” to The Oath, he had experienced such a spine-chilling rush, he jumped right into his next book, Kissed by the Show.

Skye Blaine writes memoir, fiction, and poetry — themes of aging, disability, coming of age, and awakening. She earned an MFA in Creative Writing from Antioch University in 2003. Her personal essays, fiction, and poetry have been included in these anthologies: Water, Journey, Stolen Light, Untold Stories, and Sisters Born Sisters Found.

Bound to Love is the true story of a single mother who encountered and navigated a complicated nightmare for any parent: her child, the only baby she could ever bear, was born with a life-threatening congenital heart defect and suffered a more brutal health diagnosis soon after.

Awards: Pacific Northwest Writers Association: Bound to Love won first prize in their memoir contest in 2005. Then it went in the closet for seven years, came off the shelf in 2012 and was rewritten twice. Bound to Love won the IndieBRAG award in 2016.

Her book won the Pinnacle Award.

Arlene Miller, also known as The Grammar Diva, is the author of eight grammar books and two novels. Her Best Grammar Workbook Ever continues to be an Amazon bestseller. Arlene’s weekly blog post was the inspiration for Fifty Shades of Grammar. She is also a copyeditor for both fiction and nonfiction and offers grammar presentations and workshops. 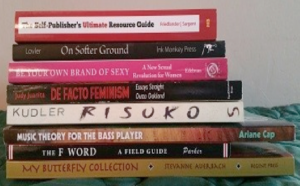 On Softer Ground by Sherrie Lovler

Be Your Own Brand of Sexy by Susan Edelman, MD

Music Theory for the Bass Player by Ariane Cap

A Field Guide to the F Word by Ben Parker

My Butterfly Collection by Stevanne Auerbach

With COVID-19 teaching us all how to function remotely, BAIPA will meet via ZOOM ONLY until it is safe to resume in-person meetings. (Once in-person events are able to resume, we will continue the Zoom option.) We are implementing all the recommended precautionary measures to keep our meetings private and safe for all participants. All members and visitors who register in advance will receive a link to attend via Zoom video conferencing. On the Friday evening before the meeting, we will send the link and password out to members and to non-members who … END_OF_DOCUMENT_TOKEN_TO_BE_REPLACED