Gloria Dunn-Violin of Novato talked with scores of folks before writing her second book. 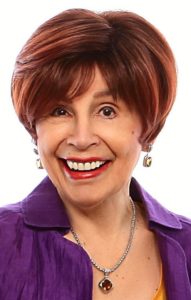 One of the saddest stories she heard was about “a man who had a lucrative business and retired without a clue about how to spend the rest of his life. He started showing up at his children’s workplace and telling them what to do. When they became estranged because of that, he started playing the stock market online and lost millions of dollars.”

He died, she notes, “with no family, no money, no happiness. No nuthin’.”

That tale made it into Gloria’s new book, ReVivement: Having a Life After Making a Living, which coins her substitute word for retirement — reVivement — and contains many more anecdotes, most with happy endings.

One describes a couple who found that “when the husband, who’d been working like he was running at 90 miles an hour, retired, it was like he fell off a cliff. He started bossing his wife around. That didn’t work, so they sat down to learn how to communicate better with each other and to find activities they enjoyed individually as well as jointly. It took them three years to feel comfortable.” But they did get there.

Why did Gloria write this guidebook? To help folks about to leave their jobs, and who might be lost, “pre-think, plan and understand how to make the best life possible when they could have another 30 to 40 years to live.” 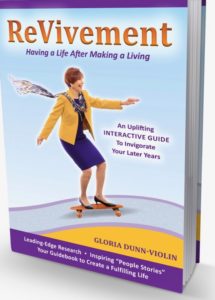 The cover of ReVivement is striking because it features a photo of the author gleefully skateboarding.

She believes the fourth and final section of the book, which offers 15 exercises, will be particularly helpful to readers.

Her favorite is one “in which you make believe you’re 100 years old and you’re going to give a speech on what your life was about.”

The first section of ReVivement is on the aging process and how to cope with it; the second deals with scientific research and innovations for longevity; the third focuses on how to create a life after retirement.

Gloria hopes to use her new book as a springboard to a new career: speaking about retirement, as well as conducting pre-retirement workshops for corporations.

She’s already given “43 or 44 talks so far,” in bookstores such as Book Passage and Copperfield’s, at the San Rafael Civic Center library, and to Rotary Clubs, women’s and business groups — “everywhere from Healdsburg to Scotts Valley.”

Gloria writes a monthly column for the Santa Rosa-based North Bay Business Journal. Her first book, From Making a Living to Having a Life, was published in 1999 and deals with creating on-the-job satisfaction.

This latest book, based on her 25-year work history and an enormous amount of research, is available through local bookstores or Amazon. The paperback is $18.95, and the e-book format is $9.99.

Woody Weingarten, San Anselmo author of Grampy and His Fairyzona Playmates as well as Rollercoaster: How a man can survive his partner’s breast cancer, has been an award-winning editor and writer for more than six decades. Now he’s a feature writer, reviewer-critic, blogger and publisher — despite allegedly being retired. He's busily working on another book that anthologizes 70 newspaper columns he wrote over an 11-year period, rewriting a book interrupted by the pandemic that's about keeping the sizzle in relationships, and staying active in his dotage by being a doting grandpa.

With COVID-19 teaching us all how to function remotely, BAIPA will meet via ZOOM ONLY until it is safe to resume in-person meetings. (Even when we decide to resume in-person events, we will continue the Zoom option.) We are implementing all the recommended precautionary measures to keep our meetings private and safe for all participants. All members and visitors who register in advance will receive a link to attend via Zoom video conferencing. On the Friday evening before the meeting, we will send the link and password out to members and to non-members … END_OF_DOCUMENT_TOKEN_TO_BE_REPLACED