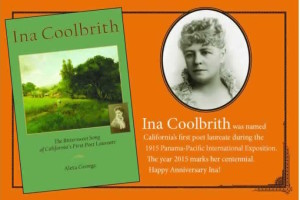 Aleta George will be heading to the East Bay to promote Ina Coolbrith: The Bittersweet Song of California’s First Poet Laureate this weekend and next. At the Oakland Book Festival on Sunday, May 31, she will participate on a panel, Oakland Writers Reconsidered, at 1:30pm in Hearing Room 1, where she will represent Ina Coolbrith, Oakland’s first public librarian. The all-day book festival offers lots of great panels and readings, so come for the day.

At the Bay Area Book Festival on June 6-7, look for George’s book table near Ina Coolbrith’s poem panel on the Addison Street Poetry Walk in Berkeley near the corner of Shattuck. Come by and say hi. If you want to buy a paperback or the special centennial (limited) hardcover edition just mention BAIPA for a 20% discount! This two-day festival takes place in downtown Berkeley with more than 300 authors from around the world.

Save the date! On June 25, the San Francisco History Center and the San Francisco Public Library will celebrate Ina Coolbrith’s centennial with Aleta George as the featured speaker. One hundred years ago, Coolbrith was crowned California’s first poet laureate at the Exposition Auditorium (now the Bill Graham Civic Auditorium) during the Panama-Pacific International Exposition. George will speak about Coolbrith as poet, librarian, and the most popular literary ambassador in the early American West. 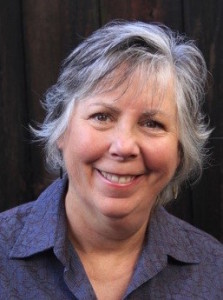 Lily OBrien
I am a professional copyeditor, proofreader and writer with a background and experience in both journalism and public relations, and a speciality in arts and entertainment. I have written feature articles for a variety of newspapers and magazines, including the Pacific Sun, the San Francisco Classical Voice, the San Francisco Chronicle and the Marin Independent Journal.
← 2016 San Francisco Writers Conference Early Bird Registration Ends this SUNDAY, May 31
Karin Fisher-Golton Will be Speaking at June BAIPA Meeting →

With COVID-19 teaching us all how to function remotely, BAIPA will meet via ZOOM ONLY until it is safe to resume in-person meetings. (Even when we decide to resume in-person events, we will continue the Zoom option.) We are implementing all the recommended precautionary measures to keep our meetings private and safe for all participants. All members and visitors who register in advance will receive a link to attend via Zoom video conferencing. On the Friday evening before the meeting, we will send the link and password out to members and to non-members … END_OF_DOCUMENT_TOKEN_TO_BE_REPLACED