You are here: Home / Audiobooks / SOVAS Award Nomination for Audiobook of ‘When Your Life Depends on It: Extreme Decision-making Lessons from the Antarctic’

I have some exciting news.  The audiobook version of my recent book When Your Life Depends on It: Extreme Decision-making Lessons from the Antarctic, (co-written with Brad Borkan) has been nominated for a prestigious SOVAS award. 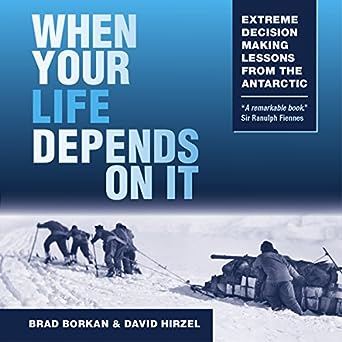 Good Morning America called the Voice Arts Awards “The Oscars of voiceover acting.” The annual event is sponsored by the nonprofit Society of Voice Arts & Sciences (SOVAS) will be held November 18 at the Warner Bros. Studio in Burbank.

The awards feature nearly 75 categories across multiple genres.  Our book is one of five nominees in the category “Audiobook Narration—History, Best Voiceover.”

The narrator, Dennis Kleinman, lets his love of the spoken word shine through in this audio production.  We are all in notable company in this category, which includes Cosmos by Carl Sagan and Lincoln’s Last Trial by Dan Abrams and David Fisher.

This is one more example of a self-published book rising to national attention.

With COVID-19 teaching us all how to function remotely, BAIPA will meet via ZOOM ONLY until it is safe to resume in-person meetings. (Even when we decide to resume in-person events, we will continue the Zoom option.) We are implementing all the recommended precautionary measures to keep our meetings private and safe for all participants. All members and visitors who register in advance will receive a link to attend via Zoom video conferencing. On the Friday evening before the meeting, we will send the link and password out to members and to non-members … END_OF_DOCUMENT_TOKEN_TO_BE_REPLACED