Q: How did you come to write Bones in the Wash? 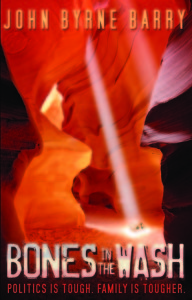 I wanted to write the kind of book I like to read — fun, fast-paced, full of drama, with compelling characters. Real people facing real problems. Like John LeCarre or Scott Turow, for example, in that sweet spot between genre and literary. But not the kind of book you’d study in literature class. The idea for setting a novel during a political campaign came to me in 2004 when I was knocking on doors for John Kerry in the working-class suburbs south of Milwaukee. Having grown up in Chicago, however, Milwaukee didn’t seem colorful or exotic enough to me.

New Mexico did. Years earlier I had visited the state with a friend, and we stayed with his cousin on Nob Hill in Albuquerque and hiked the slot canyons in Bandelier National Monument, which became the setting for a pivotal flash flood scene in the novel. In 2007, when I joined National Novel Writing Month and started a new novel, I set it in New Mexico, during the presidential campaign. The working title was Turquoise Trail, after the mining and tourist road between Albuquerque and Santa Fe. Then in 2008, when I had the chance to volunteer for the Obama campaign in Albuquerque, I jumped on it.

At that time, I hadn’t thought of my subtitle — Politics is Tough, Family is Tougher — but I knew I wanted to weave in family soap opera with the political story. The presidential campaign between Barack Obama and John McCain is in the foreground, but the protagonists, Tomas Zamara and Sierra León, face as many formidable challenges in their personal lives as they do in their campaigns.

Q: What did you like most and least about being involved in the political/campaign world?

The worst part is how tedious phone banking and door knocking were, how few substantive conversations I had. Before I left for Milwaukee in 2004, however, I committed to a work colleague that I would write a blog post every night, so I kept my eyes and ears open for interesting things to write about. Funny thing. You notice more when you’re paying attention.

The best part, of course, was winning, and I still remember vividly being with a thousand other folks in the Albuquerque Convention Center when Obama won and we were yelling and high-fiving each other as he delivered his acceptance speech in Chicago’s Grant Park.

Q: How long did it take you to write the book and can you describe your personal process and how you used your writing group[s] and other editors.

From initial conception to publication was about six years, and maybe half of that time, I was writing every day. (Mostly rewriting.) I am so grateful for the wonderful novel writing group I was part of, for almost 13 years. I could never have completed the book, let alone ended up with something good, without them. They read Bones in the Wash in segments over a long period of time, many versions of some chapters, and they were tough on me. So tough that when the book was finally published, I was surprised at how positive readers were. Because most readers don’t read with their critical hat on like my novel writing group did.

The biggest change they suggested, which I resisted at first, was to eliminate one of my point-of-view characters. In addition to the two mentioned above — Albuquerque Mayor Zamara, the chair of the John McCain for New Mexico Campaign, and Sierra León, his fierce opponent — I also followed Lamar Rose, Sierra’s father, who also, unbeknownst to Sierra, was Tomas’ therapist. When I cut those seven or eight chapters from Lamar’s point of view, it was like chopping off my arm. (Lamar is still in the book, but is only seen through the eyes of Tomas and Sierra.)

But the book is better without the Lamar chapters. Not to mention shorter and tighter.

My wife Nanette, who was my toughest critic, also helped me get rid of things I didn’t need. Sometimes I resisted, and sometimes she was wrong, but mostly she was right, and I’m pleased to say that most of the time, I listened to her. (Though she’d be the first to say that I left in some things she would have liked me to cut.)

Q: I heard you read from Bones in the Wash at Book Passage, and you read a sex scene that I found awkward and sophomoric. I’d been dreading reading it and was pleased that it wasn’t in the book or maybe it fit so well I didn’t notice it. What strategies did you use to talk about romance and love and sex? Any authors serve as role models? Any people who gave you help in that area?

Writing sex scenes is risky. But I include them because sex can unleash intense emotions and vulnerabilities, and reveal character in ways no other activity does.

In the first few months after Bones was published, I received a lot of heartening feedback. But it wasn’t all positive. One friend said some of the sex scenes, “read like a cheap grocery store romance, and take away from the book—which I loved.”

She specifically called me out for phrases like “his hardness found her wetness.” (I cringe when I read that now — I don’t know what I was thinking.)

My wife and her book group were also critical of the sex scenes.

One huge upside of self-publishing is that I can upload a new version when I find mistakes or want to make changes. So I reworked the sex scenes. Didn’t take them out as much as shortened them, left more to the imagination, focused more on feelings and less on body parts.

At that Book Passage reading you refer to, I was reading the before and after. I’m thrilled to hear that you didn’t find the passages you had been dreading.

Q: What lessons did you learn about publishing your own first novel? What would you do differently?

I would work harder on the marketing and promotion. Writing is a solitary business, but the marketing and promotion don’t have to be. For example, I did a book launch at a cafe in Berkeley and invited others to read excerpts, and we had a wonderful event. I even ran out of books to sell because I didn’t want to be too presumptuous, and bring too many books. But I only did that one launch. 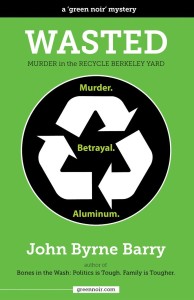 This fall, I launched my second novel, Wasted, a “green noir” mystery set in the Berkeley recycling world, and I recently completed a ten-venue author tour, with readings at recycling centers, salvage yards, universities, bookstores, and cafés. No single event was as good as my one Bones in the Wash launch, but collectively, I reached more people and sold more books. An awful lot of work though.

You can read posts about the tour, including Reading Wasted as a Reader, Not an Author and Surrounded by English Professors, as well as the first three chapters, at greennoir.com.

Wasted follows bookkeeper Brian Hunter as he reinvents himself as a reporter, investigates the “recycling wars,” and finds the body of his friend Doug crushed in an aluminum bale. He hunts down the murderer, all the while trying to win the heart of Barb, Doug’s former lover, now a suspect in the murder.

But Wasted is not just another trashy mystery. Set in the gritty and malodorous world of garbage and recycling, it explores rich and resonant themes of reinvention, transition, and discarding that which no longer serves us. Part mystery, part love triangle, part midlife crisis, and part political satire, Wasted asks the age-old question: How do I act with truth and integrity, make the world a better place, and still get laid

It’s all made up, except that some characters started out being based on real people, and some scenes were ripped from the headlines, especially the political dirty tricks. But by the time I added my imagination, incorporated feedback from readers, and rewrote the damn thing 18 times or something, there were only hints of those original inspirations.

Interestingly, one reader said he liked the book, but thought the dirty tricks were over the top. Not realistic. But all of them were based on real incidents, though not necessarily in New Mexico. I did pile them on, and embellish a little, but sadly, I did not have to conjure them up.

I knocked on hundreds of doors in dozens of Albuquerque neighborhoods, and there was one conversation that made it into the book, albeit in a distilled form.

We were advised not to argue with people — our job was get supporters to the polls, not to persuade opponents. But now and then, I couldn’t resist, especially with this one woman who was painting her house, who said that Obama would not pledge allegiance to the flag. When I asked her where she heard that, she said TV, and then her neighbor, a grizzled old guy with a tall boy of beer, launched into a rant about TV.

I had to be sparing with anecdotes like that, just drop them here and there as fleeting images so as to keep the story racing along.

As for the places, those are a combination of real and imagined. I set scenes in the Flying Star Café on Central, in the Mine Shaft Tavern in Madrid. I had Sierra León and her reporter friend take the tram up to Sandia Peak. I am pleased to say that readers from New Mexico have told me I got the setting right, from the landmarks and culture to the social hierarchy.

I’m halfway through a new novel about a family facing end-of-life issues. The protagonist is a therapist whose father has cancer and dementia, and wants his son to help him end his life.

First he refuses, but his father keeps pushing and eventually he fulfills his father’s wish, and then, at his father’s memorial, his sister accuses him of murder. This sets off a high-profile fight, pitting the death-with-dignity movement against the right-to-life movement, with each sibling an unwilling front person.

My intention is to make the story not morbid or too much of a downer. I like a challenge.

Find out more about Bones in the Wash at bonesinthewash.com. 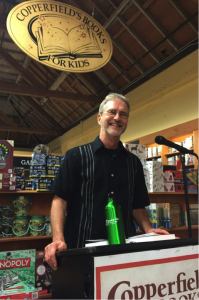 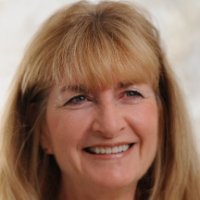 With COVID-19 teaching us all how to function remotely, BAIPA will meet via ZOOM ONLY until it is safe to resume in-person meetings. (Even when we decide to resume in-person events, we will continue the Zoom option.) We are implementing all the recommended precautionary measures to keep our meetings private and safe for all participants. All members and visitors who register in advance will receive a link to attend via Zoom video conferencing. On the Friday evening before the meeting, we will send the link and password out to members and to non-members … END_OF_DOCUMENT_TOKEN_TO_BE_REPLACED