You are here: Home / BAIPA News / Reflections on Fortune Cookie Prophecies and Saint Prayer Cards: ‘My Life is About to Change’

Three years ago I stood in front of my friend’s mirror that was decorated with fortune cookie prophecies and saint prayer cards of Santa Barbara. I looked at myself straight in the eyes and said, “Barbara, your life is about to change!”  And it did.

I had just received my first grant, one from a major global foundation, to make my first film. I had never before written a grant and I had never made a film, so this luck and trust were quite profound, and the responsibility felt tremendous given the subject — ocean acidification. As a mother, an avid sailor, and ocean lover, I had great concern about the environmental consequences our ocean is facing and the repercussions for our children. I was driven by passion. Little did I know then that within one year the film crew would be invited to Tasmania to screen our final film, and, along with global environmental leaders and filmmakers, to speak about our twenty minute project, Racing with Copepods, which ended up featuring and being supported by the world’s leading oceanographer, Dr. Sylvia Earle. The film was later accepted to the Wild and Scenic Film Festival and today, three years later, is still being screened by schools, community events, media centers and more.

When the project was done, I reflected on the passion that had driven me, realizing, surprisingly, that the project completed one of my childhood dreams — wanting to be an oceanographer. That dream had been harshly thwarted in 1981. My father was fired from his union job and labeled a federal criminal by President Ronald Reagan when his union struck against the federal government. My family lost almost everything, including financial support for me to attend college and pursue an oceanography degree at UC–Santa Barbara.

During those hard emotional and financial times, I also lost my coveted guitar lessons. Well, it just so happened after making my first film I met a very powerful Brazilian guitarist named Jose Neto in San Anselmo. So, I thought about it — if I didn’t become an oceanographer, at least I made a film with the world’s leading one. Maybe I could do that with a guitarist too and complete my childhood dreams! I knew Jose Neto was a consummate guitarist, in league with Jimi Hendrix and Carlos Santana. He’s a humble musician who has been in service to some of the most important global musicians and yet most people don’t know his name. Jose and I talked and finally agreed to make a film about him even if we had no idea what it would be about!

As we began to film, something happened. Little by little an international community of musicians, including Harry Belafonte, Steve Winwood, Airto Moreiria, Jai Uttal, Narada Michael Walden, and the Brazilian filmmaker Ronaldo Aguiar stepped in to help us create a powerful musical story about loyalty, devotion and positive vision, values Jose Neto lives by and is known for. And, Deborah Santana’s foundation offered me seed money! It’s been a very humbling experience.  The Man Behind the White Guitar releases this year. It’s my first co-directed film and my second film ever. 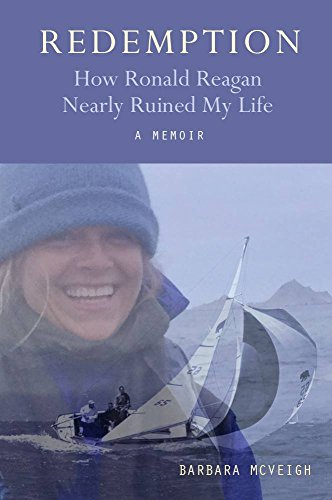 I’ve written about this story in a self published memoir Redemption, How Ronald Reagan Nearly Ruined My Life, along with the hard truths that emerged in my personal life at the same time. As I was trying to save the world, my husband stepped into a relationship with another woman, a “spiritual goddess,” who calls herself the “Goddess of Joy.” There is humor there if you look for it. After all, we do live in California where there is a strong goddess movement, it’s the Year of Aquarius, and the fiftieth Anniversary of the Summer of Love. Besides, I came to a profound realization and self actualization — if she gets to call herself the “Goddess of Joy,” that would make me the “Mother Goddess,” the greatest goddess of all! And I’m blessed to be a writer in these times.

Truth is stranger than fiction and all is fair in love and war, said the fortune cookies!

I also come clean with other hard truths in my life, including a thirty-year estranged relationship with my father, and a reflection of Reagan’s policies that have arguably resulted in our economic and environmental crisis today. My book is getting great reviews on Amazon. And, all of this work  is now leading me to host a new university radio and community access television production in order to talk about art, politics and culture, fused with positive vision that we so much need today.

My reflection? Indeed my life has changed profoundly and in the words of Belafonte, it’s time to “put a smile on your face and get dancing!”My book Redemption, How Ronald Reagan Nearly Ruined My Life is available on Amazon. 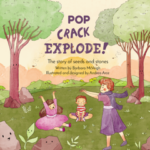 My new children’s book will be released on Earth Day, 2017 (April 22). It’s called Pop! Crack! Explode! The Story of Stones and Seeds.

Here are some upcoming events that I hope you can attend:

And, keep an eye out for book launch parties and release of the film The Man Behind the White Guitar. Here is a teaser of the film!
You can reach Barbara McVeigh at [email protected]com or visit her website at barbaramcveigh.com.

Share this…
← A Series of Unfortunate Events and the Publication of ‘Sarah’s Secret: A Western Tale of Betrayal and Forgiveness’
Blooper: Be Sure to End All Sentences →

UPDATE: BAIPA will continue to meet via ZOOM ONLY until it is safe to resume in-person meetings, which we are planning to try on May 6th, 2023 (see below for some initial info). Even when we decide to resume in-person events, we will continue the Zoom option. We are implementing all the recommended precautionary measures to keep our meetings private and safe for all participants. All members and visitors who register in advance will receive a link to attend via Zoom video conferencing. On the Friday evening before the meeting, we will send the link and … END_OF_DOCUMENT_TOKEN_TO_BE_REPLACED