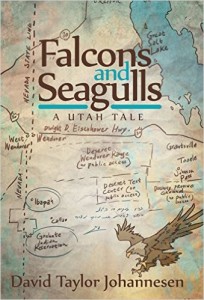 BAIPA member David Johannesen recently had a reading and signing in a local book store, selling 24 copies of his book Falcons and Seagulls, a Utah Tale. And not only that, but a Los Angeles producer is looking at as a possible TV movie. Congrats David!

His new novel has been described by Kirkus as “… a winding, [romantic and political] thriller.” It is set in Utah and Massachusetts, home of its “reluctant” heroes,” two “tribes,” the Mormons and Quakers. Readers have pondered what is fiction and fact in a story where Howard Hughes and the Mormon Church secretly assist Israel complete its nuclear preparedness in the early 1970s. A glance at his blog link will show further commentary, including assurances from his long-ago Oxford mentor that the book is one story, not two. 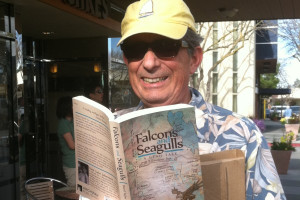 David Taylor Johannesen was born in Salt Lake City, Utah, a fifth-generation Mormon and great-great grandson of Church President, John Taylor. He grew up, and was educated from an early age, in Massachusetts, where he found the plain quietude of the Society of Friends, and lived there for a number of years with his wife, Linda. They have moved recently to Northern California with their Border collie Fallon.

With COVID-19 teaching us all how to function remotely, BAIPA will meet via ZOOM ONLY until it is safe to resume in-person meetings. (Even when we decide to resume in-person events, we will continue the Zoom option.) We are implementing all the recommended precautionary measures to keep our meetings private and safe for all participants. All members and visitors who register in advance will receive a link to attend via Zoom video conferencing. On the Friday evening before the meeting, we will send the link and password out to members and to non-members … END_OF_DOCUMENT_TOKEN_TO_BE_REPLACED