You are here: Home / BAIPA News / Bill Amatneek’s ‘Heart of a Man: Men’s Stories for Women’ Win BAIPA Cover Design Contest
Editor’s note: We missed posting this during the holiday season due to, well, no good reason. 🙂 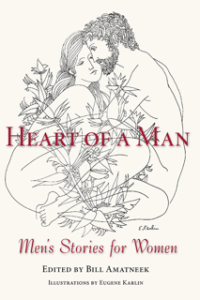 There were many deserving book covers at the contest, and I am fortunate and honored to have won.

I’ve always felt that the title of a book is the sizzle, and the subtitle is the steak. Originally the title of the anthology was Passions of a Man, but a number of my women beta-readers suggested that the book was more about Heart than Passion. I saw they were correct, and went with that. The subtitle, “Men’s Stories for Women,” is as simple an explanation of what’s inside as I could come up with.
The Eugene Karlin cover drawing has been sometimes controversial. A social media post I promoted was banned after some 500 imprints. Incredibly, showing too much flesh in the drawing was their problem. And on the evening of winning this contest, I showed the cover to a woman who was making a film about women’s rage. She said it was the image of a man assaulting a woman. To me, it’s an image of love.
My thanks to BAIPA for this contest and for all they do, and to Becky Parker Geist for her leadership.
GO BAIPA!
Heart of a Man: Men’s Stories for Women
Share this…
← Happy New Year. Time to Gear Up Your Marketing with Video
New Awards Program Seeks Self-Published Authors →

UPDATE: BAIPA will continue to meet via ZOOM ONLY until it is safe to resume in-person meetings, which we are planning to try on May 6th, 2023 (see below for some initial info). Even when we decide to resume in-person events, we will continue the Zoom option. We are implementing all the recommended precautionary measures to keep our meetings private and safe for all participants. All members and visitors who register in advance will receive a link to attend via Zoom video conferencing. On the Friday evening before the meeting, we will send the link and … END_OF_DOCUMENT_TOKEN_TO_BE_REPLACED