At the October 22 meeting of the California Writers Club–Marin, John Byrne Barry, winner of the 2015 BAIPA Best Book Award, will be presenting “When Plots Collide — Create Suspenseful Page-Turners by Weaving Multiple Storylines.” 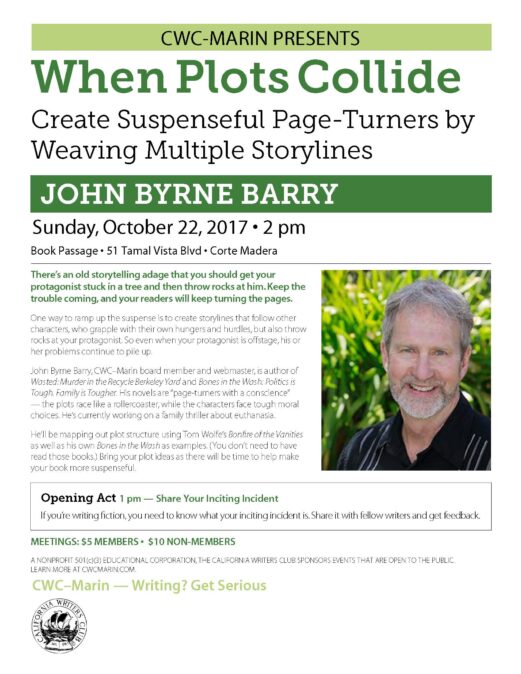 We often think of suspense as the province of the thriller, where a nuclear bomb is about to go off in downtown Los Angeles and the guy who’s defusing the bomb is stuck in traffic. But suspense is an important part of almost all novels, as well as memoirs and nonfiction narratives.

One way to create that suspense is by weaving multiple storylines together. If you read novels or watch movies or TV shows, you already know this formula. It’s used extensively on crime shows — think “Law and Order.” The show starts with a couple of unrelated stories, but you know the stories are going to bump into each other.

What Barry will be doing in this workshop is taking this colliding-plot formula apart and putting it back together in a step-by-step way so you can deliberately weave multiple storylines to maximize suspense.

He’ll be mapping out the plotlines of Bonfire of the Vanities, Tom Wolfe’s brilliant 1987 novel about New York City, and his own novel, Bones in the Wash: Politics is Tough. Family is Tougher, set during the 2008 presidential campaign in New Mexico. (You need not have read either of these books.)

The workshop is at Book Passage in Corte Madera at 2 pm.

Share this…
← Desperately Seeking Refreshments
What is the Amazon Buy Button and Why Does It Matter? →

UPDATE: BAIPA will continue to meet via ZOOM ONLY until it is safe to resume in-person meetings, which we are planning to try on May 6th, 2023 (see below for some initial info). Even when we decide to resume in-person events, we will continue the Zoom option. We are implementing all the recommended precautionary measures to keep our meetings private and safe for all participants. All members and visitors who register in advance will receive a link to attend via Zoom video conferencing. On the Friday evening before the meeting, we will send the link and … END_OF_DOCUMENT_TOKEN_TO_BE_REPLACED