You are here: Home / BAIPA News / Albuquerque to Berkeley — Page-Turners with a Conscience

I wish I could say I’ve written and published a new book. That’s half true. I’ve published a new ebook called Albuquerque to Berkeley — Two Election-Season Thrillers. What’s new is the packaging, not the pages. (All 677 of them — that’s Kindle’s “pages” estimate.) 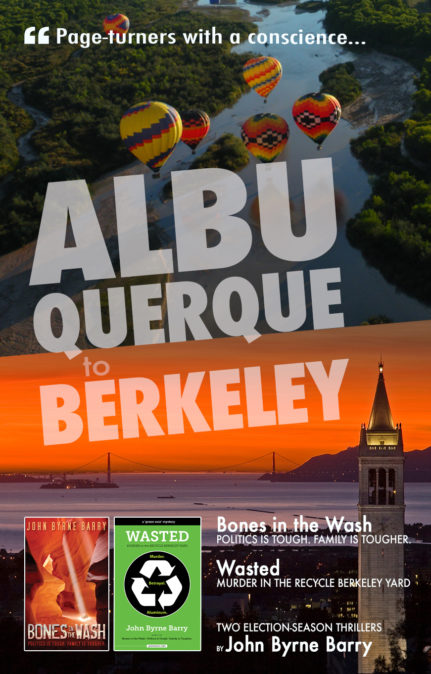 To “celebrate” the political season, I’ve brought together my two novels — the BAIPA award-winning Bones in the Wash: Politics is Tough. Family is Tougher, set during the 2008 presidential campaign in New Mexico, and Wasted, a “green noir” mystery set in the Berkeley recycling world, against the backdrop of a pivotal city council race.

What ties the books together is the daunting challenge of doing the right thing. Honesty is the best policy, right? Except maybe in politics, family, love, and murder. In Bones in the Wash, ambitious Albuquerque Mayor Tomas Zamara is charged with doing “whatever it takes” to deliver the state’s five electoral votes for John McCain. Though he has a strong sense of integrity, he knows politics is like playing football on a muddy field. If you don’t get dirty, you’re not giving your all.

That’s why I call these novels “page-turners with a conscience” — I’m aiming for that sweet spot between trashy beach reading and literary masterpiece, where the plot gallops like a racehorse, but the characters are three-dimensional and face tough moral choices.

In Wasted, Berkeley reporter Brian Hunter investigates the “recycling wars,” finds the body of his friend Doug crushed in an aluminum bale, and hunts down the murderer, all the while trying to win the heart of Barb, Doug’s former lover, now a suspect in his murder. In his zeal to tell the truth about the threat of a corporate takeover of the local recycling collective, he tells a few white lies to get information. And maybe he keeps some of the truth to himself instead of publishing it. It’s a murky business, this truth-telling.

(Here’s veteran journalist Mark Mardon’s take on Wasted:  “It’s a colorful cast and crew you’ve assembled to tell this rowdy romp, which tells more about journalism than about recycling. Using the recycling industry as a way to get into the slimy business of journalism keeps this from being a ‘message’ book about the virtues of recycling. It’s more about the shady business of hunting down a good story.”)

Albuquerque to Berkeley is only 99 cents — for an ebook with two election-season thrillers! Tell your political junkie friends.

From Manteca to Mill Valley 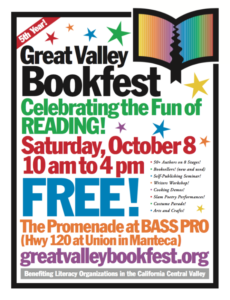 I’ve also organized several readings as the clock ticks down to Election Day — the highlight being the Great Valley Bookfest in Manteca on October 8, where I’ll be one of the featured authors. My author talk — “Page-turners with a Conscience” — is at 10:30 am, and I’ll be sitting at a table the rest of the day, hopefully signing and selling a few books.

With COVID-19 teaching us all how to function remotely, BAIPA will meet via ZOOM ONLY until it is safe to resume in-person meetings. (Even when we decide to resume in-person events, we will continue the Zoom option.) We are implementing all the recommended precautionary measures to keep our meetings private and safe for all participants. All members and visitors who register in advance will receive a link to attend via Zoom video conferencing. On the Friday evening before the meeting, we will send the link and password out to members and to non-members … END_OF_DOCUMENT_TOKEN_TO_BE_REPLACED