Woody Weingarten, who’s working on his third (and, hopefully, final) draft of his second independently published book, MysteryDates®, has been sworn in as the newest member of the Marin County Commission on Aging. 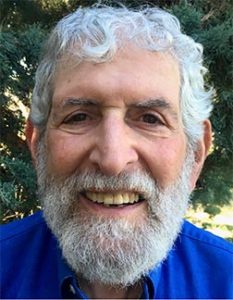 Simultaneously, he was elected — along with his wife, Nancy Fox — co-president of the Fernwood Drive Homeowners Association in San Anselmo.

Woody, who served for a year on the Marin County Civil Grand Jury and on San Anselmo’s Quality of Life Commission (now the Sustainability Commission) for 10, seven of them as chair, is the author of Rollercoaster: How a man can survive his partner’s breast cancer.

He has been an award-winning executive editor and writer for daily and weekly publications in California, Florida, New Jersey, New York and Pennsylvania for six decades, and has been Marinscope’s arts and entertainment critic for 10 years — “since his retirement.”

A father of two and grandfather of three, Woody’s lived in San Anselmo for 32 years. He says he’s planning on staying.

The 23-member commission on Aging is a federally mandated advisory council to the Marin County Board of Supervisors working “to promote the dignity, independence and quality of life of older persons through advocacy, information, programs and services.”

Woody represents District 2, home base of Supervisor Katie Rice, which includes Fairfax, Kentfield, Larkspur, Ross and San Anselmo. He says he’ll welcome any input on what BAIPA members and guests think should be priorities on helping the elderly.

UPDATE: BAIPA will continue to meet via ZOOM ONLY until it is safe to resume in-person meetings, which we are planning to try on May 6th, 2023 (see below for some initial info). Even when we decide to resume in-person events, we will continue the Zoom option. We are implementing all the recommended precautionary measures to keep our meetings private and safe for all participants. All members and visitors who register in advance will receive a link to attend via Zoom video conferencing. On the Friday evening before the meeting, we will send the link and … END_OF_DOCUMENT_TOKEN_TO_BE_REPLACED