I’m thrilled to announce the launch of my third novel — When I Killed My Father: An Assisted Suicide Family Thriller — and I invite you to my upcoming book launches in Berkeley (October 26, 3 pm at Mo’Joe Cafe), Mill Valley (November 2, 3 pm at the Tam Valley Cabin), and Corte Madera (November 17, 1 pm at Book Passage). 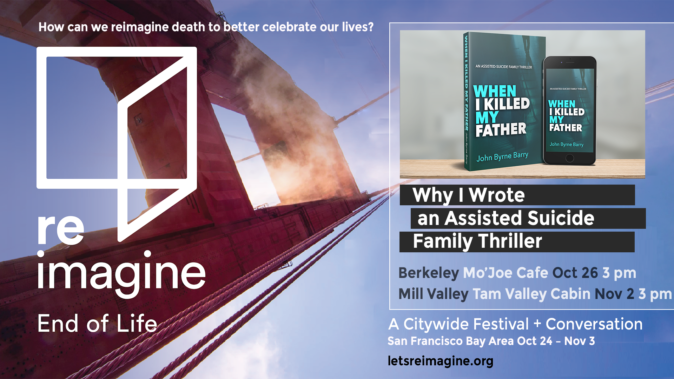 My mom died last year at 95, after ten years of falling deeper into dementia, and if I’m honest, I have to admit there were times during that period when I wished she would die.

Seeing her decline was heartbreaking. First she lost her sight, then her mobility, then her mind. Yet, often when I called and asked her how she was, she would say, “Oh, I’m fine.”

Except that time she answered, “Well, there’s a bear in my living room.”

“Sorting through the mail.”

I miss her, but I was missing her long before she died. She had become a shadow of the vibrant woman she had been. Some days she was more lucid than others, she still had her appetite, she still knew who we were more often than not, but she was not going to get better. We wished we could spare her the worst.

When I Killed My Father is fiction. All made up. My family handled our real-life challenges with a minimum of conflict. It would have made for a boring book.

In my novel, there’s a lot of conflict.

Psychologist Lamar Rose’s father has cancer and dementia, and wants his son to kill him and end his suffering. Lamar refuses, but his father keeps asking, and he relents. Then, at his father’s memorial, his sister accuses him of murder from the pulpit of the church.

When I Killed My Father is a page-turner with a conscience, about a man caught between what is compassionate and what is legal. It addresses heavy and provocative issues like mercy killing and family strife, but it’s entertaining and moves with the pace of a thriller.

My first two events — October 26 in Berkeley and November 2 in Mill Valley — are part of Reimagine End of Life SF, a community wide exploration of big questions about life and death.

Reimagine End of Life draws on the arts, spirituality, healthcare, design, even standup comedy, to amplify the end-of-life conversation. There are more than 200 events around the bay, and the festival kicks on October 24 at the Sydney Goldstein Theater in San Francisco, featuring author Annie Lamott and Anna Sale, host of Death, Sex, and Money.

My Reimagine events, called “Why I Wrote an Assisted Suicide Family Thriller,” will be one part author reading and one part conversation about end-of-life concerns — family decisions, dementia, dying, and more.

At Book Passage on November 17, I’ll be doing an abbreviated book launch, starting at 1 pm. It’s the “Opening Act” for the California Writers Club Marin monthly meeting, so I have to stop at about 1:45.

All the events free, but of course, I will be selling (and signing) books. Hope to see some BAIPA friends there. 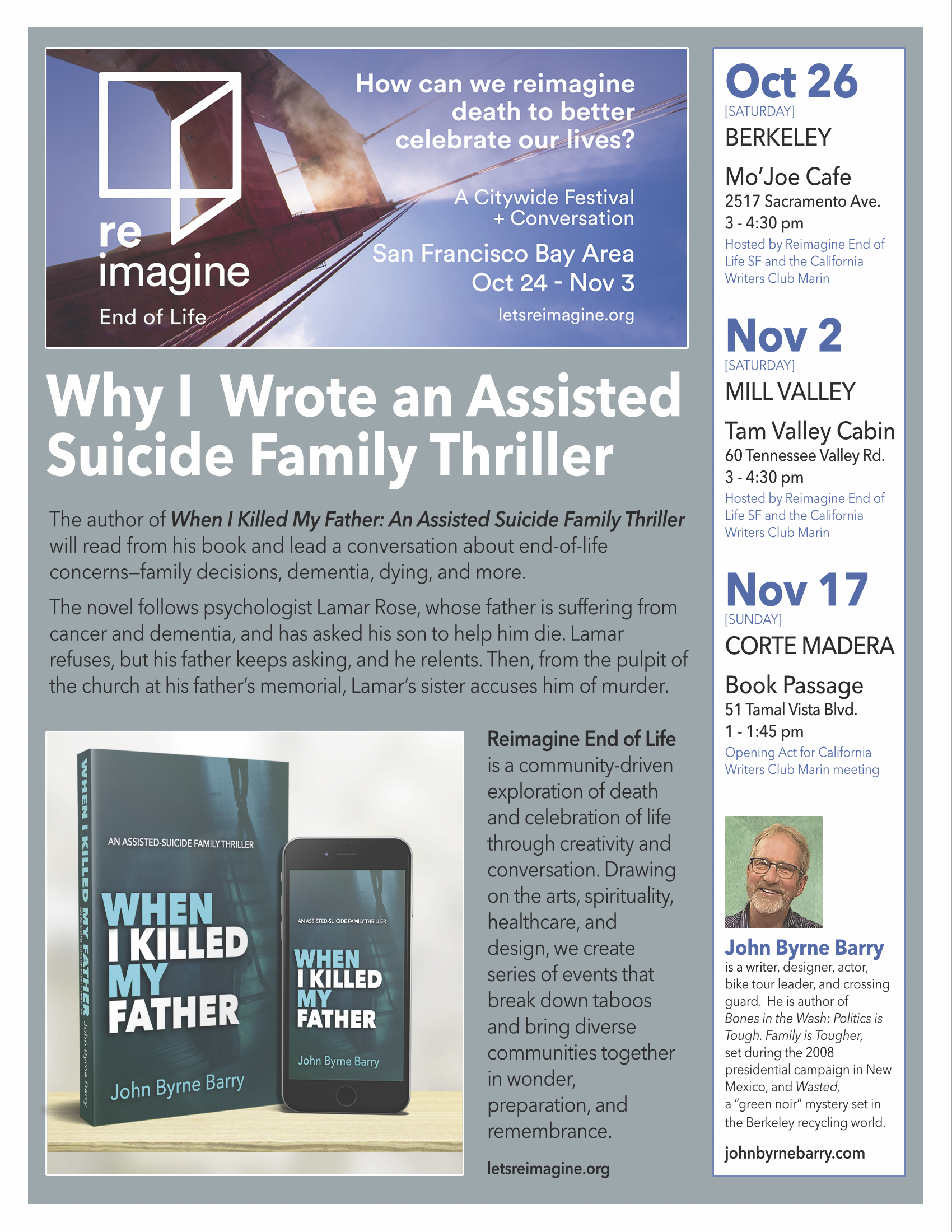 Share this…
← Launching Your Book? Let Us Know.
Can I Copyright a Title? →

With COVID-19 teaching us all how to function remotely, BAIPA will meet via ZOOM ONLY until it is safe to resume in-person meetings. (Even when we decide to resume in-person events, we will continue the Zoom option.) We are implementing all the recommended precautionary measures to keep our meetings private and safe for all participants. All members and visitors who register in advance will receive a link to attend via Zoom video conferencing. On the Friday evening before the meeting, we will send the link and password out to members and to non-members … END_OF_DOCUMENT_TOKEN_TO_BE_REPLACED