You are here: Home / Author Platform / The Gradual Empowerment of Modern Writers/Authors: How Writers/Photographers Can Market and Monetize Successfully Today
loading...

I was asked recently by the California Writers Club in Sacramento to talk about the revolution in modern publishing.

As I looked at the audience, I realized with new clarity that the main reality in our rapidly changing publishing world is “the gradual empowerment of writers/authors/photographers,” especially from 2005 to the present. 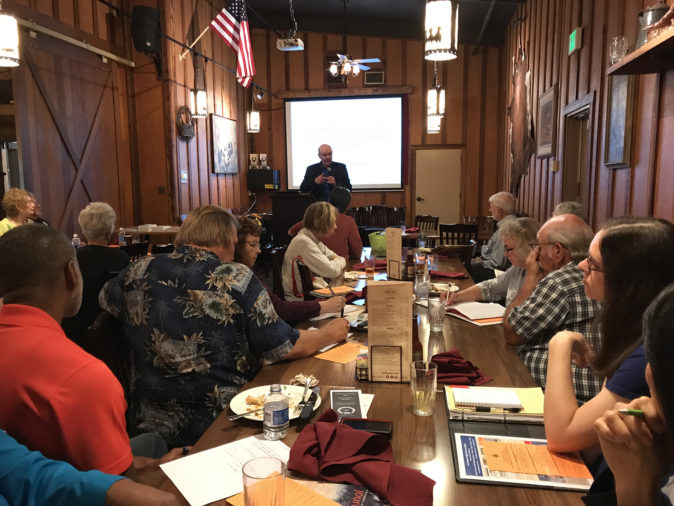 With the rise of print-on-demand technology for printed books and the prominence of inexpensive ebooks (replicated at no manufacturing cost), the 40 aspiring writers/authors in the audience can publish their own books — whatever their specialized content might be. Traditional print book publishers need not be involved.

Moreover, most of the writers present were already publishing short “articles” on their own websites. Many were attracting audiences directly by using Google AdSense Ads or other strategies for revenue. Through Social Media expertise, these authors were often creating their own sizable audiences.

There is no reason to participate in “traditional” article publishing efforts, unless these authors want to.

The audience and I conversed for about an hour, with lots of questions asked during my PowerPoint comments. We all  learned from each other. You can see the PowerPoint with our conversation here.

(Similarly, I have presented aspects of this subject at meetings of the Bay Area Travel Writers, www.BATW.org, see summary,  and the Bay Area Independent Publishers Association, www.BAIPA.org, see summary. The latter talk, captured in a 45-minute video by Howard Slater, is now on YouTube.)

There is a significant timeline divide in recent publishing. Before 2005, opportunities to publish were more restricted. The modern era, 2005 to the present, offered gradually improving independent publishing opportunities for writers/authors. I have participated in both periods.

Actual progressive changes, of course, are incremental;  I assiduously sought them out. In one early milestone, in 1983 I signed on with CompuServe to place all my travel articles in their system, in return for a 10% royalty. CompuServe collected money-per-hour from customers who viewed their “premium content,” which included my articles. The company sent me a monthly check for the next 17 years. However, until 2005, opportunities for journalists/authors to participate in the new electronic and independent structures were relatively restricted.

Let’s go back to 1970. I was a graduate student in literature at Stanford University, on my way to a PhD and a college teaching career. I was guided by my faculty mentor, author Wallace Stegner.

I had written and photographed a literary memoir defining my experience of growing up in Minnesota, Minnesota Boy: Growing up in Mid-America, Mid- 20th Century.

I had also written a novel about being a young civilian living in the highly stressful Vietnam protest era, The Message of April Fools. The decade was influenced also by Timothy O’Leary, who preached about the insights gained from taking hallucinogenic drugs.

Wallace liked both the books, partly because he liked to write about landscapes and their human culture.  He was also politically active, though more on the environmental front than in the anti-war and anti-military-industrial-complex world swirling around Stanford.

Wallace said to me one day, “Lee, these are good books. We’ll get them published. I will introduce you to my agent. He will make the arrangements.”

I drove down to Los Angeles, and met his agent, who arranged for the books to be published by a New York publisher. After these two books were published, I decided that I wanted to be a writer/photographer rather than teach college.

Operative in that “olden days scenario” was this truth: I needed both an agent and a traditional publisher for my books and articles.

From 1970 until about 2005, I wrote many more books, some listed on my Amazon Author Page. An agent became less important, as book publishers became aware of me and made direct deals. Globe Pequot, Hunter Publishing, and Presidio Press published my books on travel. Chronicle Books and Ortho Books handled my gardening books, and Sunset hired me to do books on home repair. I also published articles/photos in almost all the major U.S. travel magazines and travel newspaper sections at that time.

Changes continued to occur in publishing opportunities, but few writers responded quickly. For example, the Internet was born as a workable reality about 1995. I started one of the earliest viable travel content websites, which is still flourishing today,  www.fostertravel.com. Many of my colleagues at that time questioned my enthusiasm for this brand-new kind of outlet.

The pace of change picked up, especially for independent book publishing, about 2005.

I was ready then with a new literary travel writing/photography book, which I had been thinking about for some time. The project was Travels in an American Imagination: The Spiritual Geography of Our Time, studying 25 of my 100 or so worldwide destination experiences. I developed an essay and a photo for each place; this seemed to me to point out the dominant reality of our time. My thesis was: This is the most wondrous time, and also the most horrific time ever, to be alive. Men were launched to the moon from Cape Canaveral in Florida; the computer and the Internet were invented. On the other hand, a nuclear exchange could render humankind obsolete in minutes. And because of man’s insidious and incremental environmental destruction (such as in the rainforests around Rio in Brazil), many rare species of animals were being eliminated.

I was planning to get a traditional publisher for the Travels in an American Imagination book. I had a major travel book with Globe Pequot, Northern California History Weekends: 52 Adventures in History. Lonely Planet was using a lot of my photos in their books — eventually in more than 300 titles. Countryman Press was a developing a series of travel/photo books, and eventually asked me to do The Photographer’s Guide to San Francisco and The Photographer’s Guide to Washington, D.C. for that series. So, a traditional publisher would have been possible, and likely.

But in 2005, I began going to monthly meetings of a group called BAIPA (Bay Area Independent Publishers Association, www.BAIPA.org). The meetings were held in Marin County, and the guru behind them was a guy named Pete Masterson. In addition to being a believer in self-publishing, also known as independent publishing, Pete was a technical expert who could offer book layout for offset printing. (All printing was still offset. Print-on-demand had not yet reached a reliable, commercial form.)

Pete said thoughtfully, “Lee, you could publish this book yourself, and do better than going with a traditional publisher. You could preserve all your rights and exploit them in the future. Good things will happen.”

Just as I listened to Wallace Stegner in 1970, I listened to Pete Masterson in 2005. Both were good decisions that changed my life in positive ways.

Pete designed the Travels in an American Imagination cover and laid out the book in color.  I had 3,000 copies printed in China (beautifully done, for only $2.31 per book). I floated the books across the ocean (at only 20 cents per book), got a rental truck for a day, and picked up my two pallets of books at the Port of Oakland. I carried them up the stairs to a closet in my condo in Berkeley. (Since then, I’ve sold about 2,500 of the 3,000. The “pretty” color books are still available from me directly, but the main current marketing effort for the printed book is through print-on-demand, both at Amazon and Ingram, as a black-and-white book.)

For distribution, I got the book into wholesaler Baker & Taylor, which fed through Ingram to bookstores and directly to libraries. Amazon Advantage distributed my printed book. So, I could sell books if I could create demand.

After Pete retired from BAIPA,  people stepped forward to lead this pioneering self-publishing group. We are especially indebted to Judy Baker (Book Marketing Mentor) and Joel Friedlander (The Book Designer).

Just as Pete said, because I self-published Travels in an American Imagination, I retained all the rights and, depending on the opportunities that arose, could do whatever I wished about them.

Pete invited a budding entrepreneur named Mark Coker to talk at a BAIPA meeting about the rising possibilities of ebooks, a new concept at that time. Mark’s ebook publishing company was called Smashwords. I got the idea then to market my book(s) as ebooks, both directly through Amazon and everything else through Smashwords or its competitor, BookBaby.

I wanted good things to happen for this book and my other books.

At BAIPA, I met the organization’s president, audiobook producer Becky Parker Geist. She developed Travels in an American Imagination as an audiobook.

Then, a 30-year-old Chinese woman named Runa Jiang came to San Francisco to meet me. Runa owned a publishing company in China named Fiberead; the name intrigued me. She explained her progressive vision, a belief that fiber optics would eventually make all knowledge instantly and freely readable worldwide.

Runa wanted to license my literary book Travels in an American Imagination: The Spiritual Geography of Our Time, and my detailed travel guidebook Northern California Travel: The Best Options to develop them as ebooks in Chinese. She would do all the work, arrange the translator, get the ebook set up, and pay me 30% of her profit. Because I was in total control of these books, I was able to make a deal. There have been sales of both ebooks every month for the past two years.

As a self-publisher, I took Pete Masterson’s original vision to heart. Today, I have five independently published books, and am working on the sixth.

However, this passion for independent publishing didn’t prevent me from participating in traditionally publishing books. I recently wrote/photographed a portion of a book for the leading travel book publisher of our time, Dorling Kindersley’s Eyewitness Guide Series, Back Roads California. DK said to me, “Lee, we want to do a comprehensive travel guidebook on California, and want you to write/photograph a third of it. We’ll pay you $15,000 with a work-for-hire contract.” So I did, and they invested maybe $200,000 into the content, design, printing, and marketing of this beautiful book. DK declared me an Author of Record, which greatly benefits me on Amazon, long-term.

Moreover, although I publish one article a week independently on my website blog at www.fostertravel.com, that doesn’t prevent me from also publishing articles traditionally. One of the leading traditional publishers in my travel journalism field is the AAA NorCal publication, Via. There are 6.5 million members in the regional NorCal AAA club. On 4-15-18, AAA published my article/photo project 7 Best Photo Ops in the West in their blog.

“Empowerment” suggests choice, meaning “both” rather than “either/or” in modern publishing. The modern writer/author can consider both self-publishing and traditional publishing, doing whatever is most advantageous for him or her.

At my Sacramento talk, I was thankful that my message to the audience was:

You can publish today, both your books and articles. No one can prevent you from being published: your books as print books and ebooks, and your shorter pieces as articles on your website/blog. You may also cultivate publishing your writing through traditional publishers. Although your commercial success is not assured, your opportunity to create and publish is. The empowerment of the modern writer/author has been achieved.

With COVID-19 teaching us all how to function remotely, BAIPA will meet via ZOOM ONLY until it is safe to resume in-person meetings. (Once in-person events are able to resume, we will continue the Zoom option.) We are implementing all the recommended precautionary measures to keep our meetings private and safe for all participants. All members and visitors who register in advance will receive a link to attend via Zoom video conferencing. On the Friday evening before the meeting, we will send the link and password out to members and to … END_OF_DOCUMENT_TOKEN_TO_BE_REPLACED