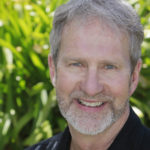 A group of mystery writers, agents, and writer-wannabes gather for a conference at a remote retreat, and then there’s a real murder. They all think they’re great detectives, so they bump heads trying to solve the mystery.

The evening starts with dinner at 6:30; the murder mystery follows at 7:30. Shortly before the play ends, the actors stop and ask the audience members to help nail the murderer. Each table picks a captain who reports who they think committed the murder and why.

Barry has written two novels — Wasted, a “green noir” mystery set in the Berkeley recycling world, and Bones in the Wash: Politics is Tough. Family is Tougher, set in New Mexico during the 2008 presidential campaign. He acted in the Tam Valley murder mysteries the past two years. 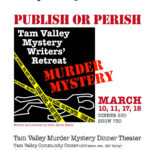 Print
← My Publication of Long Road to the Sixth ROK, a Memoir of My Family’s Survival in Post-World War II Korea
Now Where on the Website Do I Find Volunteer Opportunities? →

With COVID-19 teaching us all how to function remotely, BAIPA will meet via ZOOM ONLY until it is safe to resume in-person meetings. (Even when we decide to resume in-person events, we will continue the Zoom option.) We are implementing all the recommended precautionary measures to keep our meetings private and safe for all participants. All members and visitors who register in advance will receive a link to attend via Zoom video conferencing. On the Friday evening before the meeting, we will send the link and password out to members and to non-members … END_OF_DOCUMENT_TOKEN_TO_BE_REPLACED