You are here: Home / BAIPA News / Politics is Tough. Family is Tougher — Bones in the Wash Ebook Free Till Election Day

Between now and Election Day, my first novel, Bones in the Wash: Politics is Tough. Family is Tougher, is free as an ebook. Set during the 2008 presidential campaign in New Mexico, the novel is one part political thriller, one part family soap, and one part murder mystery.

Bones in the Wash was awarded Best Book 2015 by BAIPA. 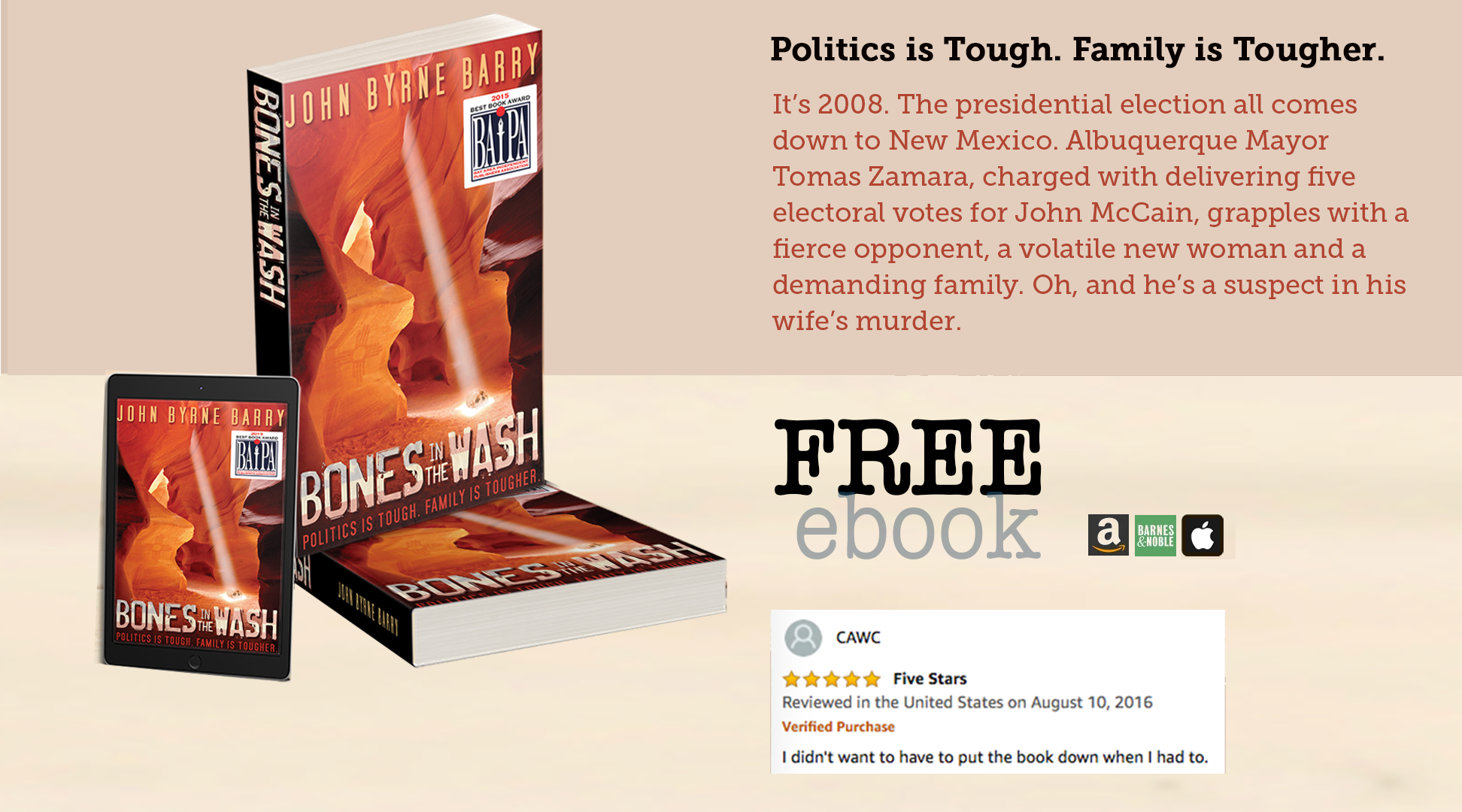 One recurring storyline in Bones is voter suppression and dirty tricks. They seemed particularly egregious back when I wrote it, but from the vantage point of now, 2008 seems so innocent, almost quaint.

Here’s one of the 70 reviews on Amazon:

✭✭✭✭✭ A political page turner
Bones in the Wash is a fast-moving whodunnit built around the 2008 presidential campaign as it played out in New Mexico. The story alternates between two attractive and sympathetic characters who are on opposite sides of the campaign. It includes political dirty tricks, international drug gangs, a disappeared spouse who may have been murdered, cranky dysfunctional families, and lots of beautiful New Mexico countryside. I was up till 4 am finishing this one. The surprises continue right to the last page. I highly recommend it.
[Mike V.H.]

You might wonder why I’m giving away a book I published seven years ago instead of my more recent novel?

Well, there’s a method to my madness. When I published When I Killed My Father: An Assisted-Suicide Family Thriller last fall, I was hoping to entertain readers and also encourage them to think about a subject we tend to ignore. Death. But that was before the pandemic. I don’t feel comfortable promoting a book about death these days. But I am promoting it in a sneaky way — at the end of the free Bones in the Wash ebook is the first chapter of When I Killed My Father. I’m making it as easy as possible for a reader who enjoyed Bones in the Wash to buy my more recent book.

Will it work? Will I get new readers? I’ve set my expectations low, but they are higher than zero.

I’ll report back once I know.

In the meantime, here are the links again for the free ebook.

With COVID-19 teaching us all how to function remotely, BAIPA will meet via ZOOM ONLY until it is safe to resume in-person meetings. (Even when we decide to resume in-person events, we will continue the Zoom option.) We are implementing all the recommended precautionary measures to keep our meetings private and safe for all participants. All members and visitors who register in advance will receive a link to attend via Zoom video conferencing. On the Friday evening before the meeting, we will send the link and password out to members and to non-members … END_OF_DOCUMENT_TOKEN_TO_BE_REPLACED