The praise is rolling in for Butchertown, Thomas Burchfield’s hair-raising thriller. Don Herron, author of the Dashiell Hammett Tour, praises Butchertown for its “great cast of gangsters and gunsels,” while John-Ivan Palmer, author of Motels of Burning Madness, says, “You won’t be able to turn the pages fast enough to see what happens!” 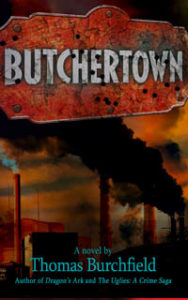 Then, one foggy night, he meets Molly Carver. Alluring, irresistible, mysterious, she lures Paul across San Francisco Bay to her hometown of Evansville, to what she claims is the California promised in the travel brochures.

But Molly’s promise is only camouflage for a dangerous game. Evansville is no paradise but a whirling sewer of sin and perdition; a wilderness of slaughterhouses, factories, oil refineries, gambling dens, brothels, and speakeasies even more decadent than San Francisco. And within its grimy, gritty heart, a gang war smolders. And someone’s about to throw a match.

No, they don’t call it Butchertown for nothing.

“Butchertown started out, in part, as a nod toward my favorite Dashiell Hammett novel, Red Harvest,” author (and BAIPA member) Thomas Burchfield says. “I also wanted to explore that world through the eyes of a young man of the 1920s. Though quite the playboy, he’s also a nice chap, a soft-boiled guy in a hard-boiled world. He strives to bring peace between the two warring factions. Unfortunately, he’s got one more problem: an old flame who happens to be leading a third faction, the forces of Prohibition, on a crusade to cleanse the city.”

Butchertown’s setting is very loosely based on several towns along the eastern shore of San Francisco Bay. “It was all industrial, up and down the eastern shore, a real environmental nightmare,” says Burchfield. “Emeryville, for one, was completely wide-open: The dry laws, along with all the other vice laws, were ignored. It was a city built for sin. Some even called it the ‘armpit of California.’ Poor Emeryville! Now, nearly a century later, it’s one of the richest cities in the United States. When Pixar locates its headquarters in your town, I’d say you’re pretty cleaned up.”

“You might call it a dystopian noir set in the past. But mostly,” Burchfield says, “there’s action, humor, plenty of suspense and even romance for fans of sophisticated literate thrillers. I set out to give readers a ripping and smart good time.”

Here are some kudos from readers:

“A darkly fascinating novel. Butchertown is incendiary.”
— David Corbett, award-winning author of Mercy of the Night

“Burchfield rounds up a great cast of gangsters and gunsels to bat his wide-eyed hero around.”
—Don Herron, author of the Literary World of San Francisco and Its Environs and The Dashiell Hammett Tour

With COVID-19 teaching us all how to function remotely, BAIPA will meet via ZOOM ONLY until it is safe to resume in-person meetings. (Even when we decide to resume in-person events, we will continue the Zoom option.) We are implementing all the recommended precautionary measures to keep our meetings private and safe for all participants. All members and visitors who register in advance will receive a link to attend via Zoom video conferencing. On the Friday evening before the meeting, we will send the link and password out to members and to non-members … END_OF_DOCUMENT_TOKEN_TO_BE_REPLACED