Three months ago I parked my car in my carport just as the light for the empty fuel tank lit up. I had just returned from the bank, where my account was now in the red. I looked at myself in the rearview mirror to put on lipstick, and found the case was empty too. Then I sat back in the seat to consider it all . . . I was flat broke. Christmas was a week away, I have two kids and rent to pay. But, strangely I had no fear about any of it. In fact, the feeling was rather cleansing, like experiencing a fast and I meditated on it for a few moments. I had completely exhausted a divorce settlement in five years while reshaping my entire life which included reflecting on 40 years of American politics, completing a Masters degree, self publishing a memoir and producing a first time environmental film. I felt I was nearing the other side, where I could really start anew. Fortunately, I had two wild cards in my back pocket — a bank was sending me a new credit card and I was months away from releasing a music documentary film, a healing project for me as I hoped would be for many in our country and beyond. Perhaps my father, a federal criminal, taught me this lesson: go full tilt when you believe in something. Full tilt with solid faith.

Yesterday I returned from a powerful weekend in England following the Netoband, a jazz fusion band led by the Brazilian Guitarist José Neto, who is the featured artist in my music documentary The Man Behind The White Guitar. The “world premier” was set to screen in the medieval town of Guiting Power outside of London following their performances. Life was beginning to move expeditiously.  José Neto is Steve Winwood’s guitarist. But as I came to this film project five years ago I quickly recognized that it’s not a singular story. That is just the popular one. Neto’s work extends far beyond the sideman status. Though he had also been with Harry Belafonte for 30 years, it’s his own band, the Netoband and his work with Brazilians Airto Moreira and Flora Purim (former Fourth World band members), which should grow wings and fly right now in our time and universe. They should become a household name, much like The Beatles, those who carry a spirit we need in our society —demonstrating loyalty, kindness, collaboration, humility and powerful music. And I see that. Why don’t others? Maybe after this film project, people will get inspired to move full tilt too. And why should I be so engaged?

The other narrative to add is my own healing. The film project offers me a way to throw concealed expletives to the corporations who made me commit a crime, similar to book burning in the early 80s, and scream the values my dad taught me — stand up for what is right.  I had been a dutiful teen working in an independent music store and fell in love with world musicians, hearing sounds, words and rhythms telling me there was a bigger world outside of my little backwater Fremont, California, at the time, a working-class suburb of San Francisco. The arts in my town didn’t extend much beyond twirling a baton with a sequined leotard for the town’s parade or taking a music class, which was guitar for me. So, my little treasure trove at the record store was my place to breathe and to dream. And I needed to dream.

Just a few years prior to my record store job, my father broke a federal law and his contract to strike against President Reagan in the last great national union strike, taking a stand for political honesty, which resulted in him getting fired and our family being shamed by our community and country. Indeed, that strike in 1981 was the last act of the “60s era” by a group of predominantly working class family men who had served in the military prior to their work as air traffic controllers, in the shadow years following Vietnam. They never resorted to violence and some were imprisoned and heavily fined. The country turned their backs on them, heralding the “Hero” of the Republican Party, I grew deep anger with no place to put it. This important history still remains unwritten in school books and is lost to an entire generation of baby boomers and millennials. It was Reagan’s first significant act that led us to today’s economic and environmental disaster following President Jimmy Carter’s “Green Deal” with solar and wind energy.

Reagan was quick about turning America corporate. One large corporation bought out the music store and I had to sift through the albums removing and discarding all my favorite artists who weren’t the big money makers. I was a kid being made to do the dirty work for a highly paid CEO and turn my back on my proverbial best friends, those musicians who had been seeing me through a bad time. I later turned away from music because it just hurt too much to remember those years. Of course, I also lost my guitar lessons, as they proved too expensive after my family went broke dealing with years of emotional and financial issues.

So, fast forward to the present, forty years later and broke again, but powered with credit, this past weekend I jumped at the chance to become the fifth wheel with the four-member band, The Netoband, and travel to England for the most exciting three-day tour starting at the legendary Ronnie Scotts Jazz Club in London. I positioned myself at the bar and watched it all unfold and this band kick it into gear like no other. Certainly it all gets revved up by Neto’s white electric guitar, and it’s the smooth combination with the other band members – Celso Alberti on the percussions, Frank Martin on keyboards and Gary Brown on bass – who create an incredible, indelible and eclectic sound that moves the spirit to places we need to go. As the London Times wrote about Neto in 1996 “…as soon as he touched his custom-guitar, sending a shower of harmonics into the silence, he rendered all musings about categorisation redundant, . . . he demonstrated just how much musical territory, opened up by Hendrix in the 1960s, still remains for subsequent generations of guitarists to explore.”

The London gig was a significant redux of the band’s former glory days of London, when they had been invited weeks at a time for fifteen years by Ronnie Scott himself, cultivating a cult-like status and incubating at least one fan I met that night who informed me that I was entering the “Winwood Deep State,” as we were to journey to Guiting Power, a medieval village the next day for a another historic performance at the village hall, as documented in our film from 2007.  Winwood did live quite close to the village, and a rocker who can claim 70 years of rock n’ roll at its best, and has vintage Hendrix, The Beatles, Clapton in his CV, I knew the “little me” in me had lots to learn.

The next night The Netoband performed in Guiting Power and the energy reignited, so much so that it incorporated the support of a whole team of state of the arts sound and light engineers, fifteen cameras, caterers, and a level of professionalism that any big time Winwood concert would mandate. Local villagers, many of them high level musicians themselves or connected to them, came running. I asked one of the sound engineers about the “smokey-like” air — why? He gleaned at me with a twinkle in his eye, “It’s rock ’n roll.” Never mind the venue was a tiny village hall, in a village that boasts two pubs, one bakery and a single post office. Size does not matter. This was Steve Winwood land and an entire community came out of the rock ages to create an atmosphere where the dead could live again.  So, I took a deep breath and just watched it all unfold.

The following day, after the air had cleared, we had the premier screening of our film The Man Behind The White Guitar, our slated “world premiere” after a five year filmmaking journey, seeded by our Marin County local legend Deborah Santana. The film took Neto back to his Brazilian roots as he reflects on his lifelong global music career. He said after the film screening, “I actually teared up and got emotional.” Nothing like a 64-year old seasoned musician who can still get deep with feelings. And, the true celebrity? The 99-year-old village baker Mrs. Watson who steals the show and appears in the film (sorry Neto!). The film has now been submitted to film festivals and it’s just a wait-and-see game now.

I took a meandering walk one early morning through the village and discovered a local cemetery of the parish church of St. Michael and All Angels dating back to The Middle Ages. There was a stone angel with the epigraph “she is not dead but sleepeth” from Luke VII. This same message also played out with David Bowie’s final Black Star album. “Lazarus” his powerful song, was the name of the young girl who is resurrected, the only one besides Jesus, as described in the Holy Bible.  Bowie’s concept was representing the idea to stop consuming and start nurturing and creating – to let go of fears and be free – before you end up in the box. Perhaps it’s no illusion that this feminine principle, matriarchy, is rising again. Netoband’s song “Burning Money” could be an inspiration to this country, as we push the boundaries of collective wisdom, collaboration, spirit, creativity, nurturing and unity and go for broke to heal ourselves, the future of our children and our planet. And this must be done arm and arm with brothers and sisters.
Neto says “Believe in yourself to live the dream.” In pure rock form – the angel must be calling. And by all accounts, her tank is full. I know mine is. 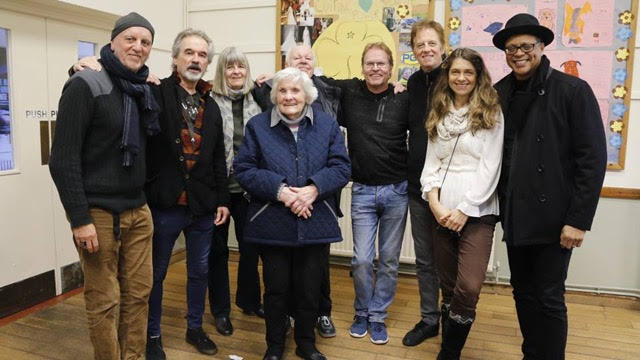 Barbara McVeighis the author of Redemption, How Ronald Reagan Nearly Ruined My Life. She’s also been the producer of Jimmy Carter Jamboree for two years straight gearing up for October 2019. Screenings of her film, “The Man Behind The White Guitar,” will be posted at themanbehindthewhiteguitar.com. For more, see barbaramcveigh.com.

Print
← BAIPA Board Elections at March 9 Meeting
What Is a Blog Tour, Anyway? →

With COVID-19 teaching us all how to function remotely, BAIPA will meet via ZOOM ONLY until it is safe to resume in-person meetings. (Even when we decide to resume in-person events, we will continue the Zoom option.) We are implementing all the recommended precautionary measures to keep our meetings private and safe for all participants. All members and visitors who register in advance will receive a link to attend via Zoom video conferencing. On the Friday evening before the meeting, we will send the link and password out to members and to non-members … END_OF_DOCUMENT_TOKEN_TO_BE_REPLACED