You are here: Home / Author Platform / My Discovery of Patreon — Patronage for the Digital Age

A few weeks ago, I came back from IBPA’s Publishing University in Portland, with several innovative ideas about improving and enhancing my “professionalism” as a fiction author. Apparently, this in turn opened up my psyche to the Cosmos, to receive new ideas about how to find and build a wider community of engaged, supportive readers. So then, about a week home from that trip, almost out of the blue, the existence of the patreon.com web-based, arts-supporting community sprang, full-grown, from the “internet multiverse” into my consciousness.

It’s probably not going to be every creative person’s cup of tea. But for me, connecting with the people who read my stories has always been a bit more significant than simply selling a book and making a buck. So, the moment I discovered Patreon, I knew it was something I yearned to be a part of. (Even before I knew it existed!) Strange as it seems, a promotional posting on Facebook (by an author “friend of a friend”) was the first I ever heard of Patreon. But it took just over a week after that, for me to become a Patreon “creator.” My page is already live, with my first posted “content” up on April 27! 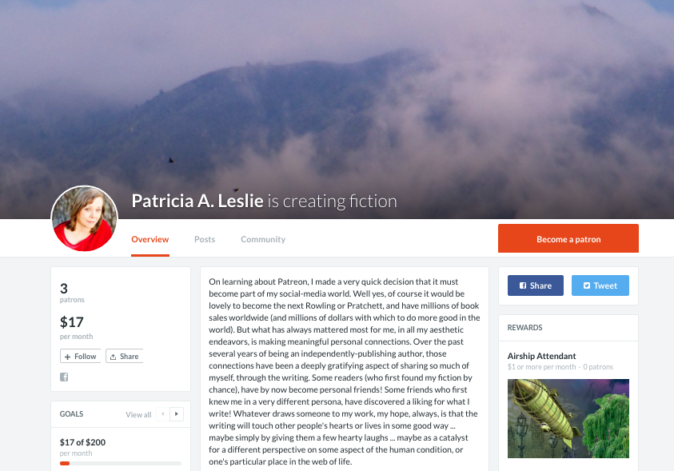 (If anyone has at some time mentioned Patreon at a BAIPA meeting Q&A, apologies. I have a vivid visual memory, weak auditory memory. So things that I see stay with me for ages, but things I only hear — unless I make notes — often go out the other ear pretty fast.)

So, for anyone else at BAIPA – whether a “creator” or “patron of the arts” (or like many of us, both) – who, like myself, did not know about Patreon till now, here’s a quick explanation. It’s rather like crowdfunding, but with ongoing, modest goals, rather than a one-time, massive goal. It’s for people wanting to develop a permanent, interactive community, and deeper-than-usual relationships around the arts … with people who create what you like, who like what you create … who share both your aesthetic tastes, and your commitment to a richer, more creative world … people who value innovative, individualistic expression, and feel called to keep the arts (and artists!) alive and healthy.

“Creator” categories are wide-ranging: besides “traditional” ideas of The Arts (dance & theatre, music, drawing & painting, photography, writing), other categories on Patreon include video & film, animation, comics, games, comedy, science, crafts/DIY, education … even podcasts & blogging on a wide range of topics. I’ve even discovered an animal sanctuary that is getting some meaningful funding here. So, I suspect that every BAIPA member – whether or not currently authoring – probably has at least one area of creative expression that would fit well in this venue!

Arts patronage is far from a new concept in human society. There have always been artistic, creative personalities, and there have always been people who had the resources to invest in supporting the creative segment of society and keep the arts flowing, for both their own great enjoyment, and that of their community. Patreon is now bringing that synergy into the digital age. Creators establish a personal page and presence on the Patreon site. They’re asked to state “goals” (how much $$ they would like to be earning, and what they’ll be doing with it) and to create “reward tiers” for different levels of financial commitment. Every Creator at Patreon must also be naturally disposed to steady creation, and able to set and keep their own commitment:  to producing and posting content of some kind.

Patreon provides lots of fine real-life examples on-site, so I won’t be redundant here. Instead, I’ll just briefly detail my own starting content. (Yes, as you probably already suspect, I am hoping that a few fellow BAIPA members will decide to soon become my Patrons — as well as considering taking the Creator plunge.)

My new fiction series is a tongue-in-cheek take on “gothic romance,” with elements of what I call “Victorian-era science fiction.” (Think “Charlotte Brontë and Jules Verne team up as co-authors!”) To date I’ve written two novellas (totaling somewhere above 80,000 words) and am developing a third. So, I’ve set up a serialised version on my Patreon page, with new short “episodes” posting every Tuesday and Thursday morning. Patron subscriptions start at just $1 per month! (Way cheaper than a visit to Starbuck’s, and lots more laughs!) That provides access to all the episodes, plus supplementary “sidebar” content that I’ll be writing; there’s also a patron “chat” feature. Higher levels of support will get additional rewards, such as autographed copies of the print edition when I publish that in 2018. This is just to let readers know what kind of individualized presence is possible on Patreon, even for a novelist.

So, to conclude, I am inviting my creative community at BAIPA, to join Patreon as patrons of my Page, at that amazingly affordable rate of $1 per month! Once you’re a part of Patreon, you can browse the whole site, see who’s there and what they’re up to … perhaps find a few more artists you’ll be inspired to support, and most important, get a clear sense of whether being a Patreon “Creator” might also be a good fit for your own “social media portfolio,” if you, like myself, have been looking for a new way to connect with fans, followers, and – yes, committed financial supporters! Here’s my page —  patreon.com/PatriciaLeslie.

With COVID-19 teaching us all how to function remotely, BAIPA will meet via ZOOM ONLY until it is safe to resume in-person meetings. (Once in-person events are able to resume, we will continue the Zoom option.) We are implementing all the recommended precautionary measures to keep our meetings private and safe for all participants. All members and visitors who register in advance will receive a link to attend via Zoom video conferencing. On the Friday evening before the meeting, we will send the link and password out to members and to non-members who … END_OF_DOCUMENT_TOKEN_TO_BE_REPLACED

Current BAIPA members must log in to get a discounted ticket for afternoon workshop, if we have one. They will automatically get the Zoom info for the MORNING session each month.