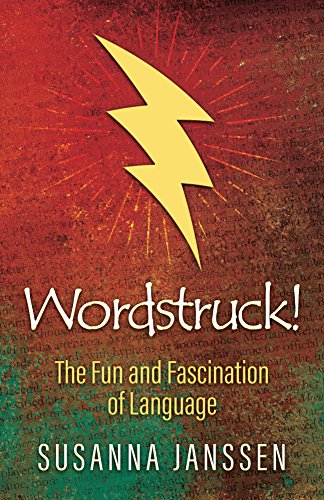 Here are two brief excerpts from the book, a collection of entertaining essays on language and the cultures that create it — from the genius of Shakespeare to translations gone riotously bad.

It was a sleepless night. In addition to the spotlight of a full moon shining through my bedroom window, I was subjected to the successive and sometimes simultaneous operas of a kennel of dogs, a clowder of cats, and a chorus of frogs. Sunrise came and with it, the cacophony of a scold of jays. I looked out the window and was horrified to witness a murder of crows in my own backyard!  Well, there goes the neighborhood. Even the exaltation of larks that followed couldn’t lift my spirits. What’s next—a plague of locusts?

If there’s a group of something, we might casually call it a lot, a bunch, a pile, a mess, a crowd, a hoard, a ton of… When it comes to animals, if they have hooves we’ll probably call them a herd, and if they have wings, a flock. Ah, but this is English, so it can never be that simple or, thankfully, that boring. If a collection of graceful white water fowl shows up in my backyard, I could shout to the neighbors to come see this bank, team, bevy, ballet, or—my favorite—lamentation of swans.

I would bet my bank account that there’s no other language on earth that has so many different and specific words for groups of animals. There’s drama in an ambush of tigers, poetry in a bouquet of pheasants, rhapsody in a flamboyance of flamingoes, hilarity in a lounge of lizards, rhythm in a rhumba of rattlesnakes, and endless possibilities for political commentary in a congress of baboons. When you come back from your photo safari to Africa, your mesmerized friends will clamor for yet another thousand photos of a tower of giraffes, an implausibility of gnus, a bloat of hippos, a zeal of zebras, a crash of rhinos, a memory of elephants, a cartload of chimps, a congregation of crocodiles, a pride of lions, and a leap of leopards.

There’s something menacing about a descent of woodpeckers, a sneak of weasels, and a shiver of sharks, yet I’m strangely comforted at the prospect of encountering a parliament of owls, a coterie of prairie dogs, or a gaze of raccoons on future nature walks.  These colorful collective nouns for animals are called terms of venery and many originated with the gentleman’s sport of hunting in 15th, 16th and 17th century England and France. Many of them were recorded in the Book of Saint Albans, published in 1486, to itemize and describe the sorts of topics and interests a gentleman might allow to occupy his time. There are articles on hawking, hunting, heraldry, and fishing (angling). Interestingly, authorship is attributed (though perhaps only the sections on hawking and hunting) to the Benedictine prioress (mother superior) of the Priory of St. Mary of Sopwell, near St. Albans in Hertfordshire where the St. Albans Press, only the third printing press in England, had been established in 1479. How’s that for creating immortality for virtually all-male sports?! Wealthy lords entertained and competed with each other inventing creative and descriptive collective terms for animals like a clutch of chickens and a school of fish that then became accepted “terms of venery.”

What about collective nouns for groups of people?  A bevy of girls followed by a gaggle of onlookers sounds pretty commonplace.  Terms for lawyers in collective might depend on the recent experience of the client, but officially they are: an argument, a disputation, an eloquence, an escheat, a greed, a huddle, or a quarrel. Doctors clump together as a dose, a doctrine, a scope, or a field. In addition to the predictable cast of actors, den of thieves, and team of athletes, modern terms include the following in collective nouns for people: a tabernacle of bakers, a babble of barbers, a promise of barmen, a shuffling of bureaucrats, a goring of butchers, a sneer of butlers, a shrivel of critics, a conjunction of grammarians, a herd of harlots, an illusion of magicians, an unction of undertakers, and an ambush of widows.  Let us set aside considerations of political correctness for another day.

One clever contributor proposed a mandible of dentists, and I’ll toss off a few inventions of my own:  a couch of psychiatrists, a toil of teachers, and a wrench of plumbers. Other readers have offered combo of safecrackers, a magnificence of models, a sash of seamstresses, a brace of orthopedists; and, returning to the four-leggeds: a racket of raccoons, a dollop of dalmatians, and a mixed bag of labradoodles.

In closing, I give you my good wishes with a warning attached: I hope you soar with a convocation of eagles and find delight in a charm of hummingbirds, but be wary when approaching a business of ferrets, and stay on the safe side when crossing paths with a wake of buzzards or a prickle of hedgehogs.

Excerpt from “You Say Goodbye, and I Say Hello”

Let’s start with goodbye because it’s simpler and, well, because Paul McCartney didn’t in his catchy song “Hello Goodbye” (“You say yes, I say no, You say stop and I say go go go…”) The original phrase was God be with ye, an ancient way of wishing one well as you took your leave. Folks in the 15th century said every syllable of that sweet expression, but by the later 16th century it had contracted to “Godbwye” (I’ve no idea how that jumble was pronounced.) With everyone already saying “Good day” and “Good evening”, it was inevitable that the phrase would soon become completely secularized to “Good-bye”. Losing God to “Goodbye” did not sit well with many people who viewed it as a trendy and degenerate utterance popular only among certain slices of society. But as is our human bent, one year’s scandal becomes another year’s viral reality, and we’ve been saying “Goodbye” ever since.

I am struck by the similarity of “God be with ye” to the archaic, but still widely known, Spanish parting phrase Vaya con Dios (Go with God).  God has also survived in the standard Spanish goodbye, Adiós, commending one to God for safekeeping. I suppose this is why Adiós is sometimes reserved for more permanent or meaningful partings, while Hasta luego works for “Bye, see you later.”

Hasta la vista is less common in Spanish speech, but as embraced in America as Cinco de mayo and chimichangas thanks to Arnold Schwarzenegger in Terminator 2: Judgment Day (1991). Ahhnold made $15 million for this movie role in which his entire dialogue consisted of 700 words. Let’s see…that comes out to $21,429 per word and $85,714 just for saying “Hasta la vista, baby.” One stunning linguistic accomplishment!

With COVID-19 teaching us all how to function remotely, BAIPA will meet via ZOOM ONLY until it is safe to resume in-person meetings. (Even when we decide to resume in-person events, we will continue the Zoom option.) We are implementing all the recommended precautionary measures to keep our meetings private and safe for all participants. All members and visitors who register in advance will receive a link to attend via Zoom video conferencing. On the Friday evening before the meeting, we will send the link and password out to members and to non-members … END_OF_DOCUMENT_TOKEN_TO_BE_REPLACED